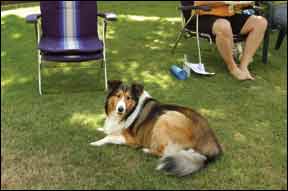 It’s a ton of fun to see an athletic, healthy dog sprinting across a sprawling lawn of thick green grass – but could this practice be dangerous to the dog’s health? A study presented in the January 2012 issue of the journal Environmental Research concluded that exposure to professionally applied lawn pesticides was associated with a significantly (70 percent) higher risk of canine malignant lymphoma (CML).

It’s a broad conclusion and light on specifics. The case-control study, conducted between January 2000 and December 2006 at the Foster Hospital for Small Animals at Tufts University’s Cummings School of Veterinary Medicine, was structured around a 10-page questionnaire that was mailed to dog owners who were having their pets treated at the Foster Hospital; the resulting data came from the owners of 266 dogs with confirmed cases of CML and 478 dogs in two control groups (non-CML cases).

The questionnaire was not included in the article; a summary stated that it covered a wide variety of data considerations, including breed, weight, medical history, and the types of chemicals used in the home. The characteristics of the CML cases did not vary much from the controls, other than in the weight category (the CML dogs tended to weigh more than 50 pounds). Exposure to types of flea and tick products and frequency of administration was similar among the groups, as was overall exposure to lawn care products.

What did show cause for concern was that the CML cases were more likely to live in homes that reported professionally applied pesticides and herbicides, though the results were only marginally significant for the herbicides. Exposure to other types of professionally applied lawn care products was not associated with increased risk. There was an increased risk, however, for dogs who live in homes where owners applied lawn-care products containing insect growth regulators – substances that inhibit the development of insect eggs and larvae.

One disappointment: specific lawn care chemicals or insect-growth regulators were not identified. Instead, the umbrella categories of herbicide, pesticide, insect growth regulators, fungicide, rodenticide, and fertilizer were used. It could be that some of these chemicals are already designated as known carcinogenics. The article notes that studies evaluating frequency of exposure and exposure dose are needed; thus it appears that the researchers did not determine which chemicals the dogs were exposed to, in what quantities, or for how long.

Also disappointing was the fact that genetic factors were apparently not considered as part of the study. Three-fourths of the CML dogs were classified as purebred, as was the control group. The incidence rate of CML is not the same for all breeds; increased risk has been reported for several breeds including Basset Hounds, Boxers, Airedales, Golden Retrievers, Saint Bernards, Bulldogs, Bullmastiffs, and Scottish Terriers. This predisposition could indicate an inherited characteristic.

Like the canary in the mineshaft, dogs can serve as sentinels for human disease because they are our close companions and are subjected to many of the same environmental influences. Canine cancers have the same biology and behavior as human cancers, and in some cases have identical histology and response rates to treatment. The goal of this study was to identify risk factors for CML from exposure to environmental chemicals in an effort to provide insight to risk factors for humans in developing non-Hodgkin’s lymphoma.

Keep in mind that exposure to lawn care products is different for canines than it is for humans. People can know if a lawn has been recently treated with chemicals and thus avoid it and take precautions when handling such chemicals. Our pets have no such option; their uncovered and unprotected bodies come in direct contact with the environment.  They see an enticing outdoor carpet, perfect for rolling around on, running across, playing fetch and wrestling with playmates on, and even ingesting. Dogs have their mouths on everything: themselves (grooming), their playmates, their toys and sticks lying in the grass, and yes, the grass itself. And those mouths can be the conduit from external to internal exposure.

Though more study is needed, the preliminary findings of this study suggest that you can reduce your dog’s risk through the following:

–Don’t use pesticides on your own lawns, or allow lawn-service providers to use them on your property.

–Prevent your dog from walking on (or rolling on, eating, etc.) any lawns, unless you are able to determine that absolutely no pesticides are used to maintain them. (Most municipalities are required to make their chemical lawn-care regimens available to the public. It says something about these chemicals that their use is prohibited on most public school grounds.)

Does size matter in a Yorkie?

"HOW MUCH FOR A PUPPY"